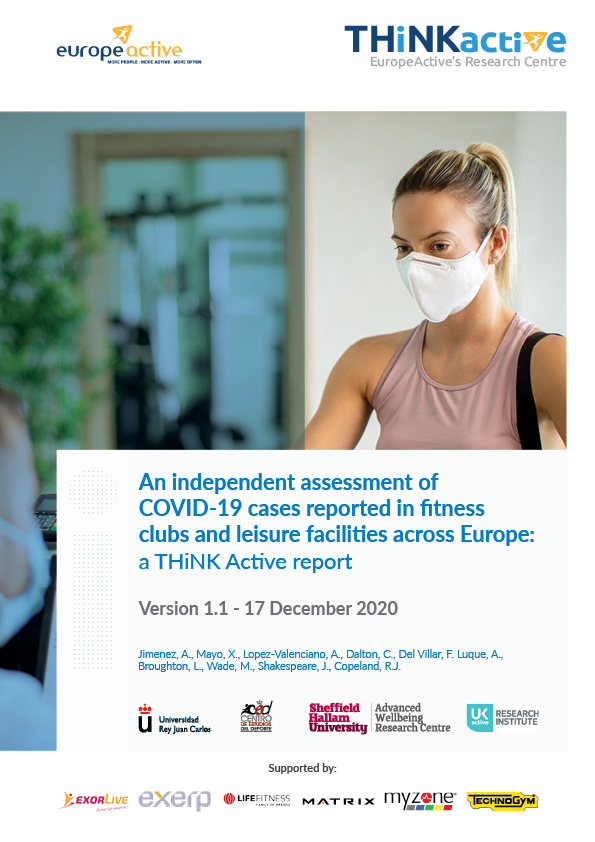 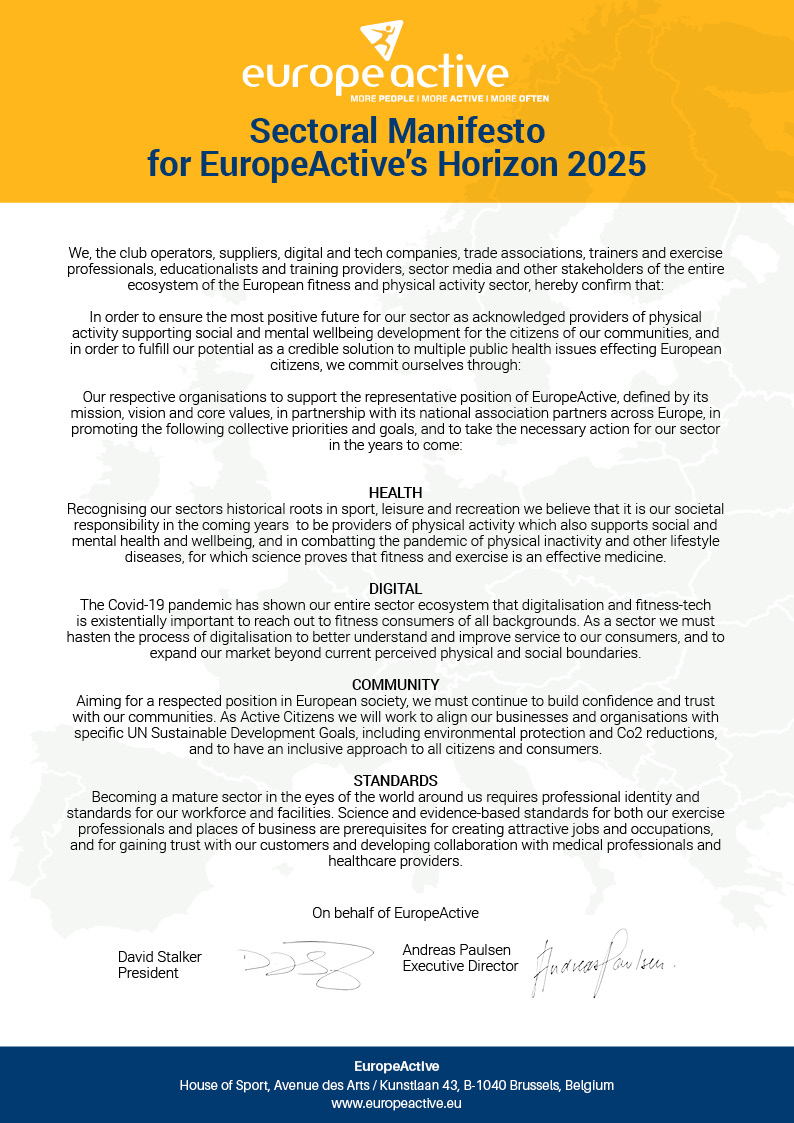 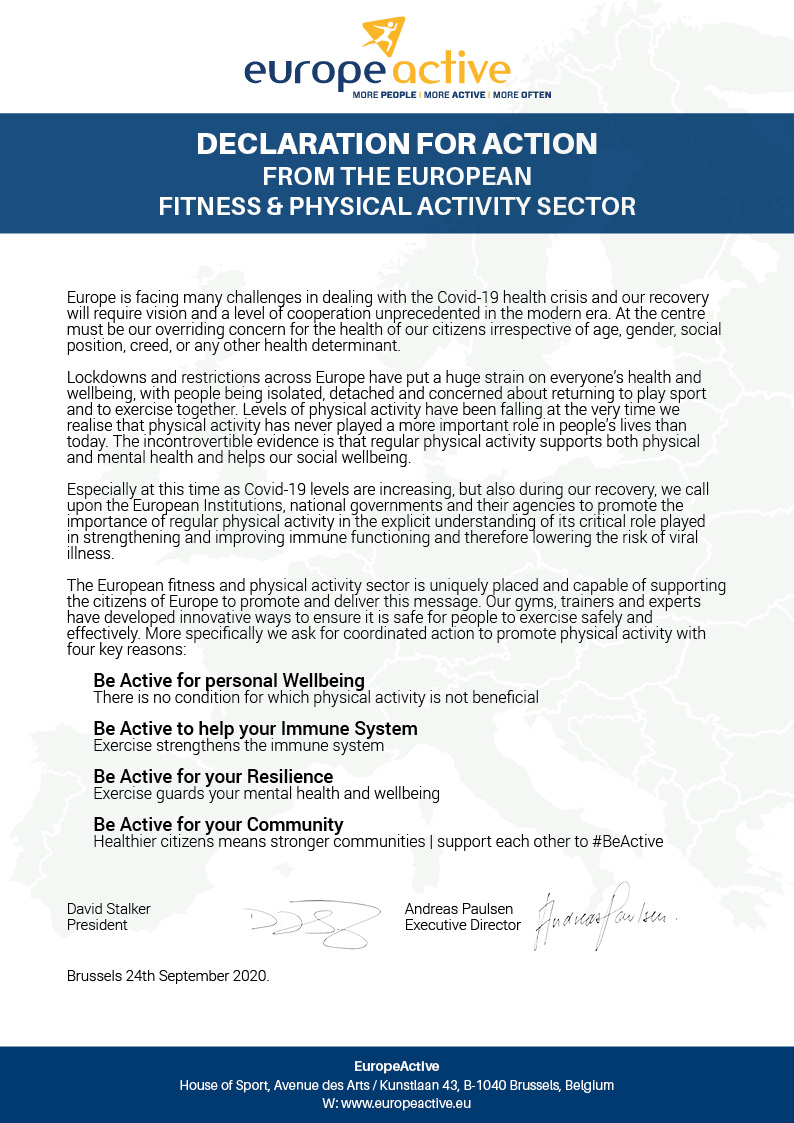 A practical guide to re-opening and operating a fitness facility

Save 20% with our introductory offer 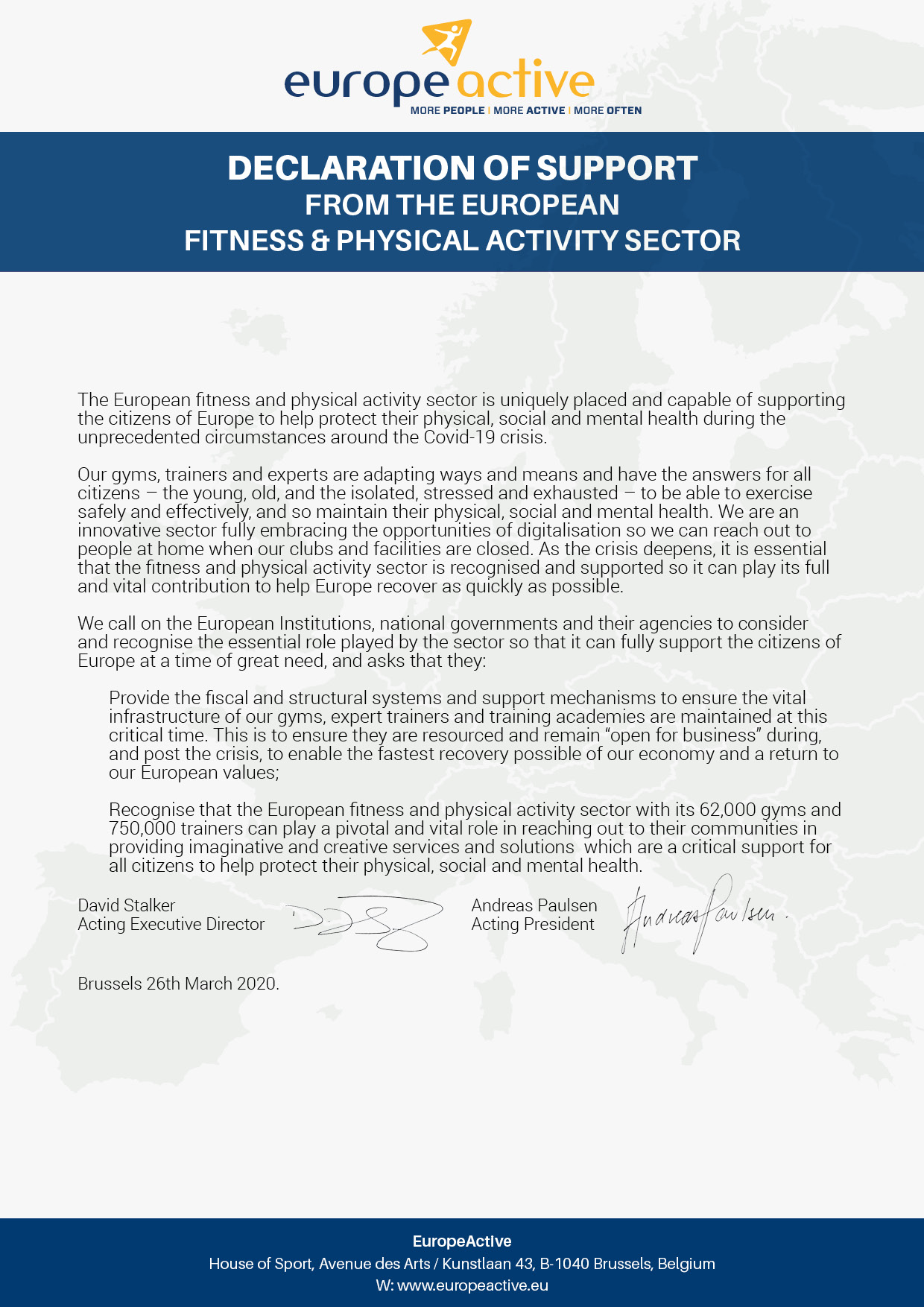 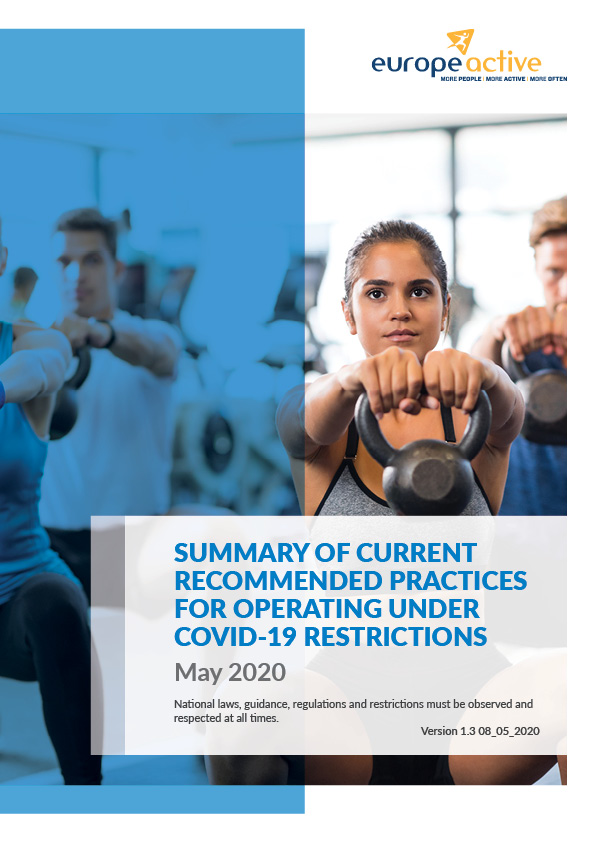 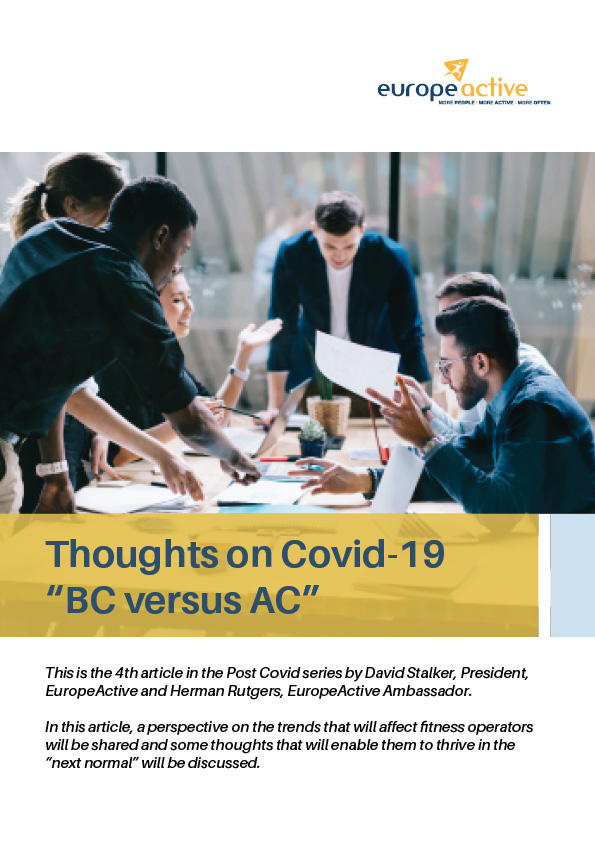 Thoughts on Covid-19 - BC versus AC 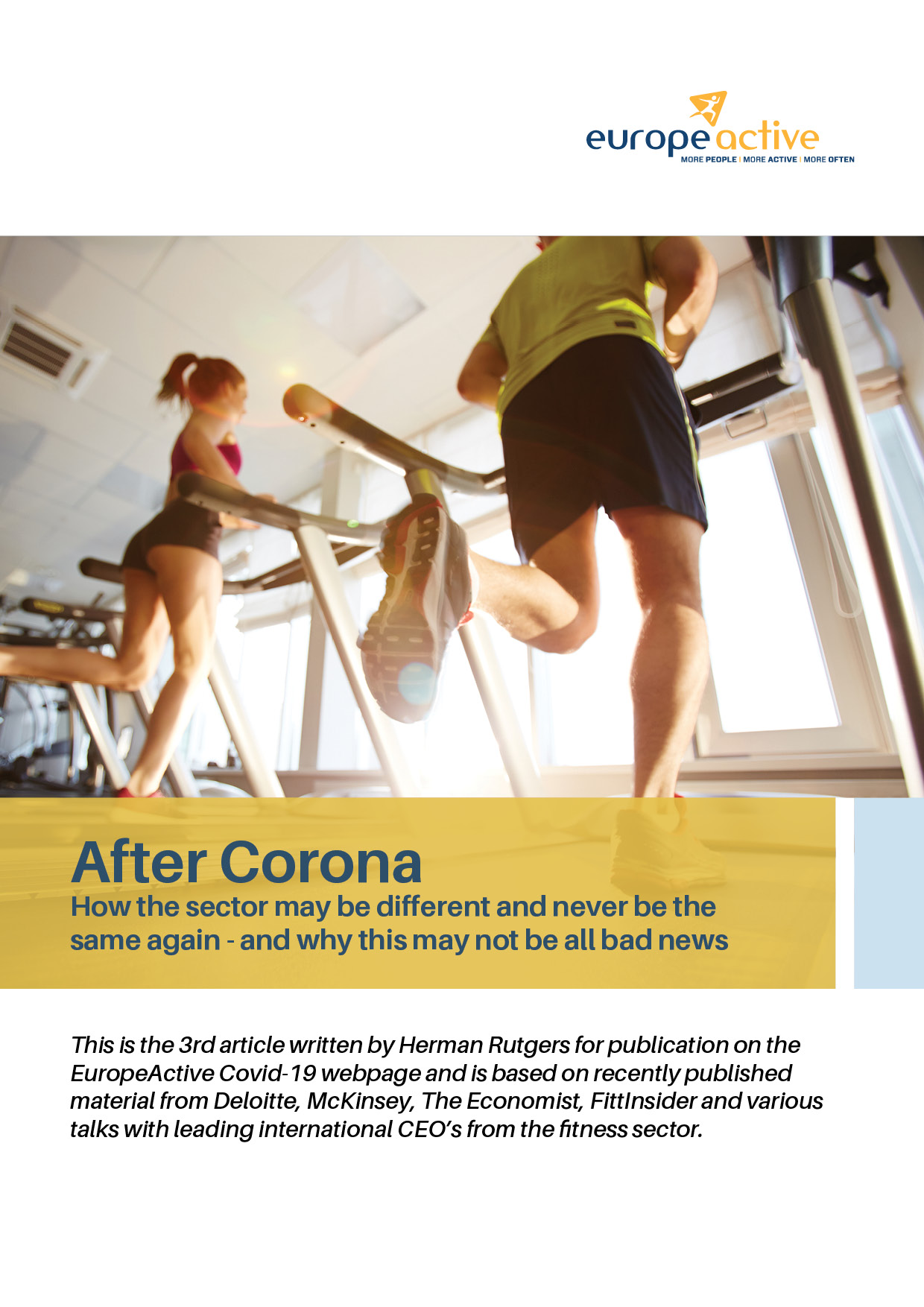 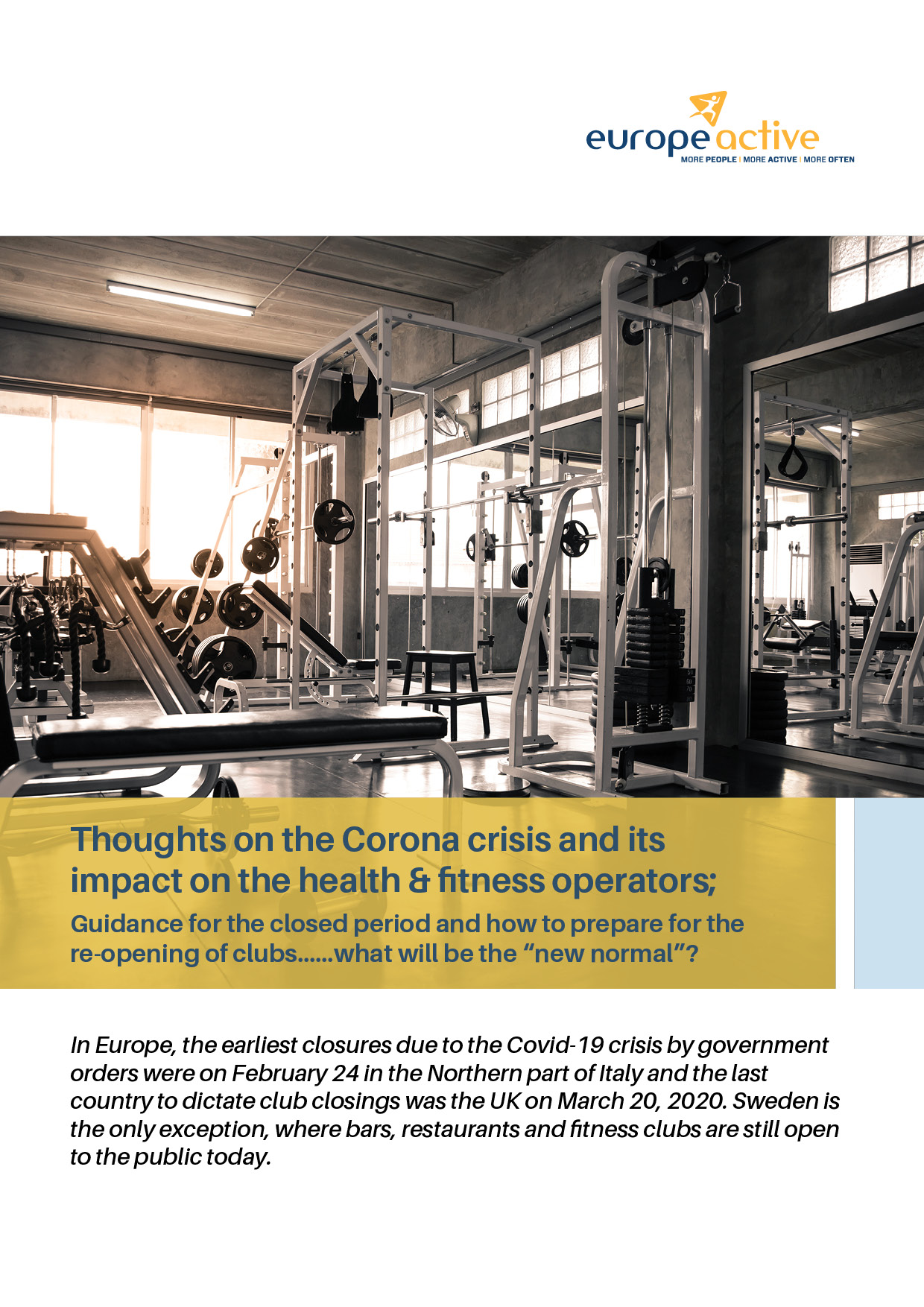 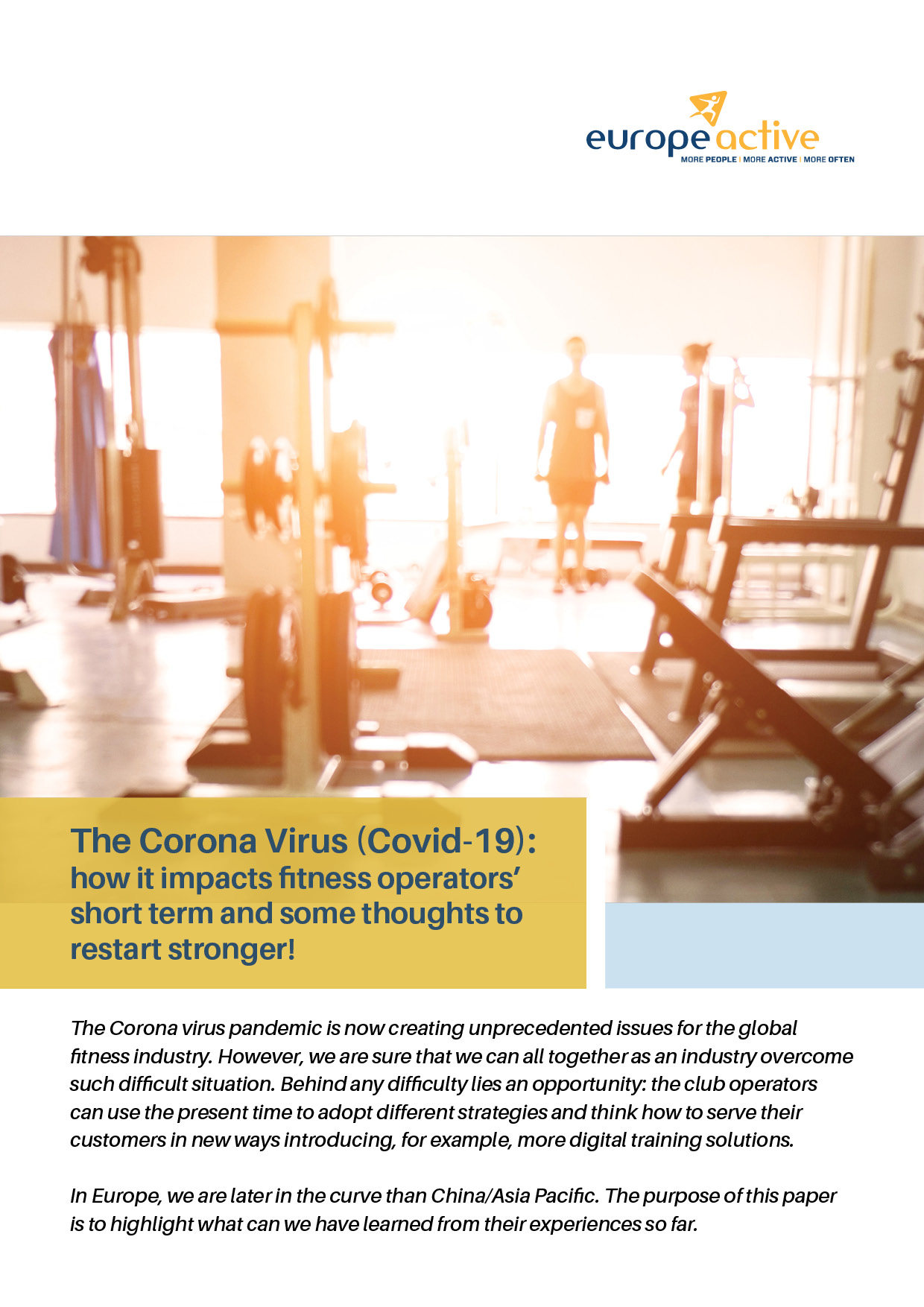 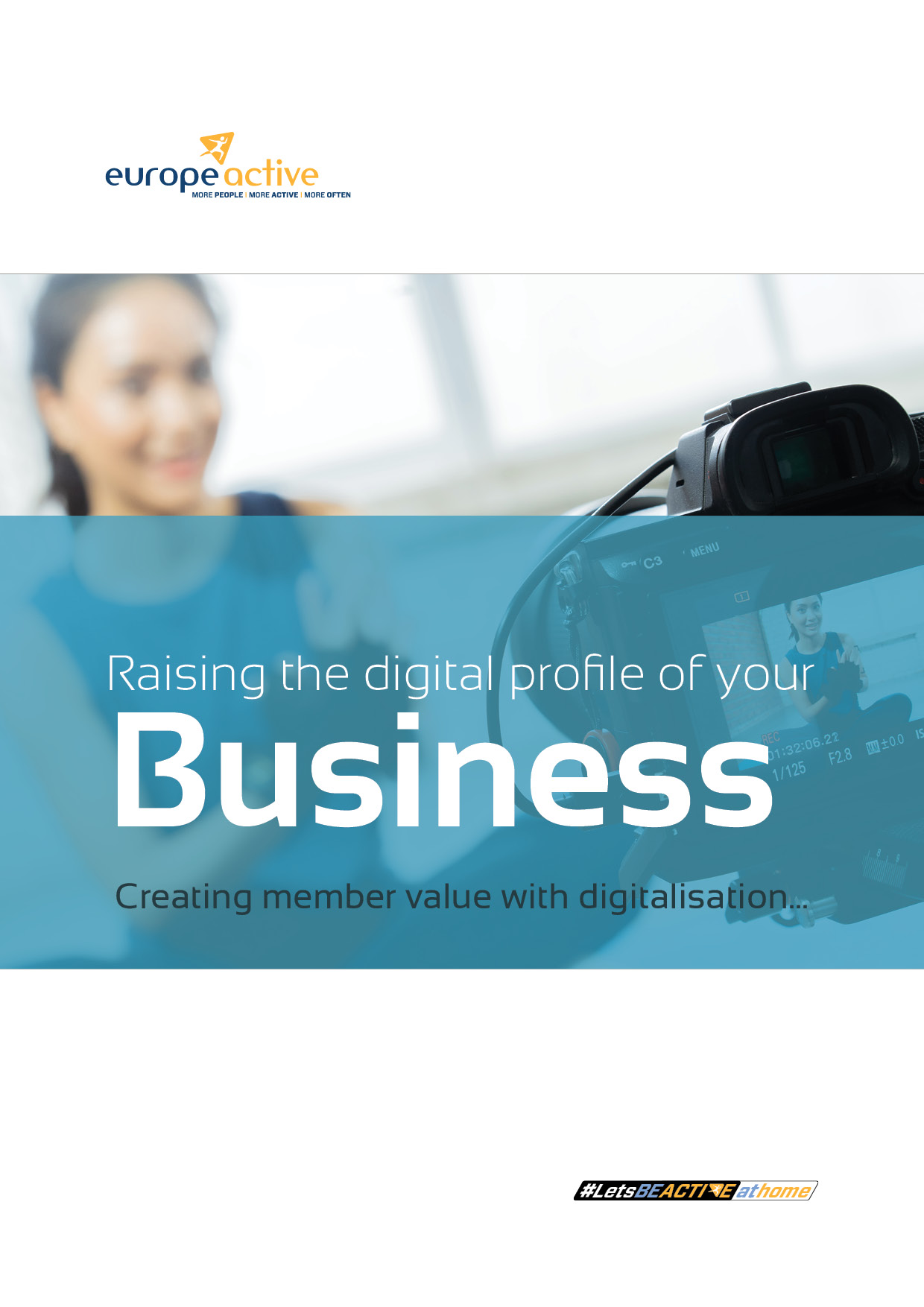 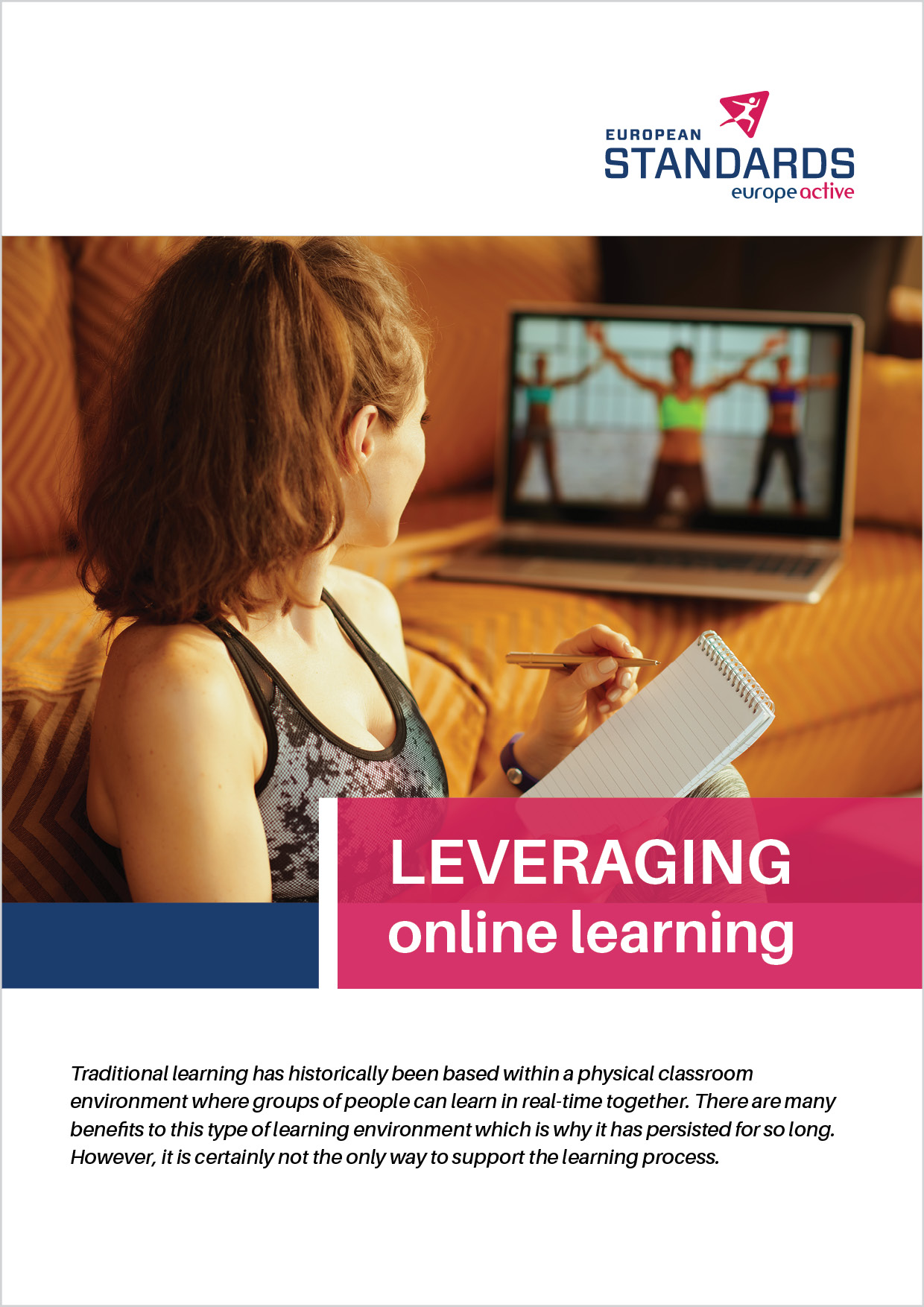 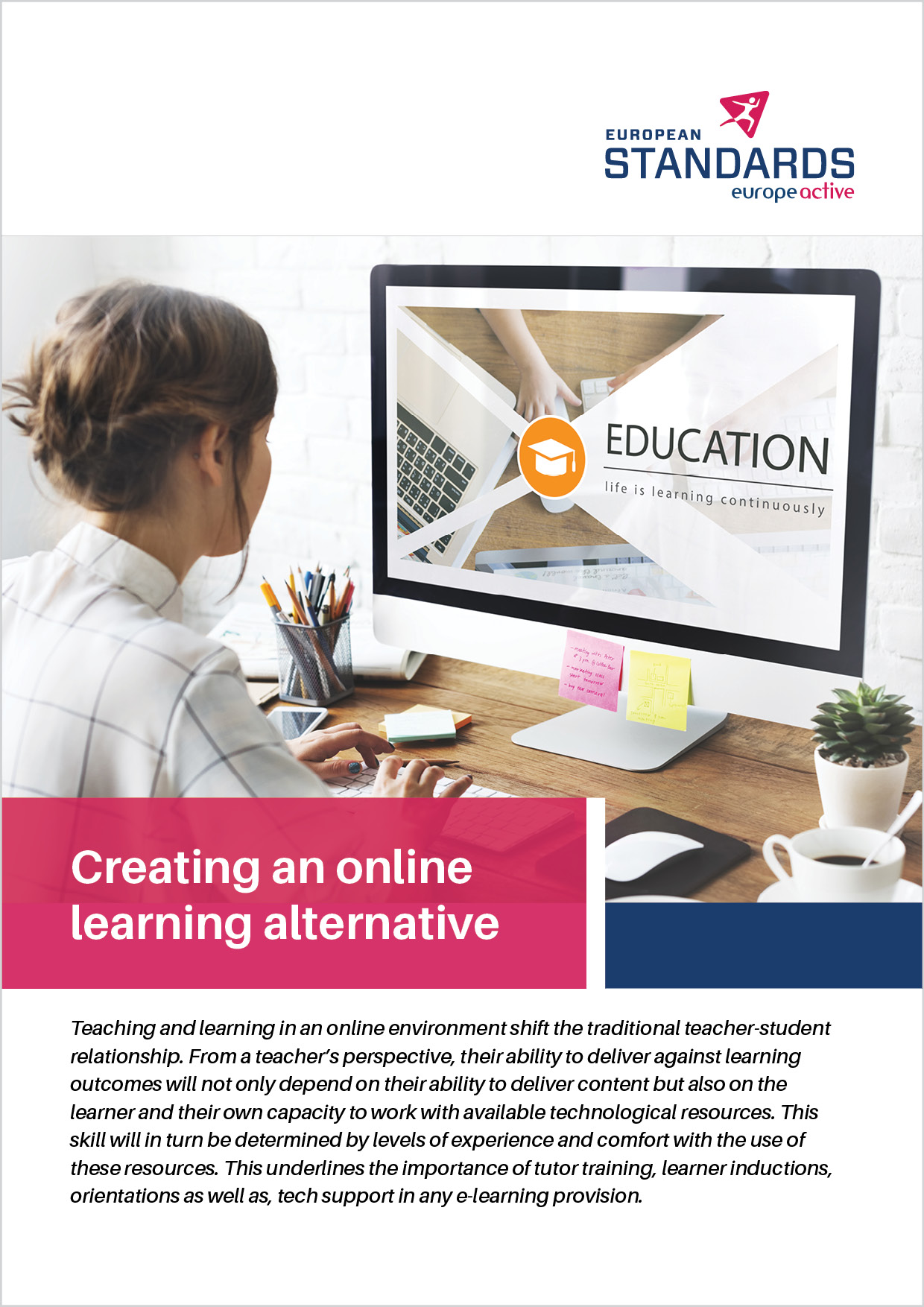 David Stalker, EuropeActive President, introduces Paul Bedford, the Retention Guru, and Jamie Edwards, Trained Brain & Peak Performance Coach as they share their views on communication with both members and employees in preparation for re-opening. 'It's not what we need to do, it's who we need to be' Dr Paul Bedford: www.retentionguru.co.uk Jamie Edwards: www.trained-brain.com

Q&A from the webinar

QUESTION: What is your expectation on the level of attrition when clubs first open?

ANSWER: Attrition has already happened. With clubs freezing memberships they have taken away the  opportunity to cancel.  Clubs will need to calculate how many they have already lost due to cancelation. If they froze memberships they will need to keep an eye on the numbers as soon as people can cancel. I have spoken with operators that saw a 200% increase in the number of customers cancelling in the week leading up to lockdown. I would be focusing on months active users as this will be a predictor of future attrition.

QUESTION: Why are you confident that the bricks-and-mortar “traditional” club format is going to make a strong come back?

ANSWER: Humans are social, we actually use isolation as a punishment. How we use clubs may change, but many people enjoy training in a facility, as has been demonstrated by the growth of the fitness market. Alternatives have been around since Jane Fonda and VHS. So there has been no need to go to a facility, but people still do. In major cities people train around their working day and facilities provide a convent way to do that as well as an environment where exercise is the social norm and compared to training outside in congested and polluted streets is relatively safe. If the alternative were true and people choose to stay away that would also probably mean the end spectators and fans at live sporting events, no live concerts, parades, parties or conferences. While we will have to maintain social distancing and higher levels of hygiene that won’t stop people wanting to train at a facility. Having said all that I do not expect every business to survive this situation.

QUESTION: Would you recommend sending a survey to members to understand what they expect from a club with restrictions, and what they would be willing to pay for? Clubs could then use this against operational costs.

ANSWER: Surveys can be tricky, you need to think through the questions carefully. If you ask them what they expect they are likely to ask for things you can't deliver. I once interviewed a women who expected the showers to be cleaned after each individual use, in a club that does 4-5k visits per day. I would ask “what would their concerns be about returning”.

Instead I would present a plan saying these are the actions you are taking. Describe what you are doing, why you are doing it and how the will impact/affect them compared to per lock down procedures. I would have one open box for comment or concerns and this is where you look to capture the sentiment of the customers. With regards to cost and paying, you probably need to find a balance between absorbing some of the costs and passing some of it on. I am not entirely not sure, but I don’t think customers would be willing to pay more for something they expected you to be doing anyway, but will accept exceptional circumstances for some increases in cost of hygiene.